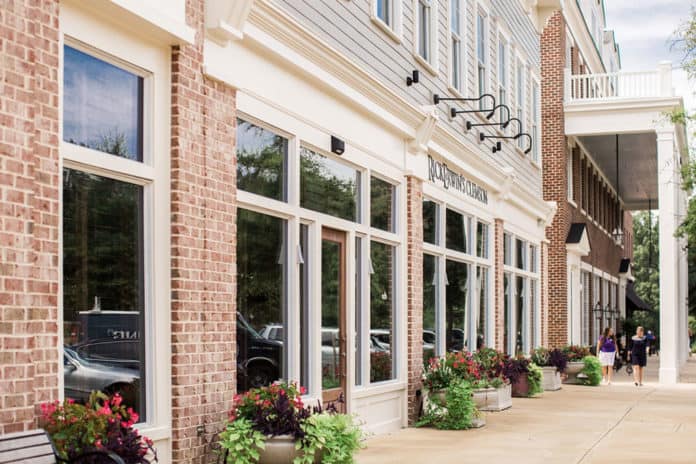 Source:  Upstate Business Journal (May 9, 2018) – In the days of sprawling subdivisions with few amenities, traditional neighborhood developments (TNDs) are a breath of fresh air. That’s where Clemson’s Patrick Square stands out — in a package that maximizes sustainability and green building concepts.

The community has been around for nearly a decade, but its style of development dates back to the days before the car — when communities were built around having shops, restaurants, and doctors’ offices within a short walking distance. It’s a design that, builders say, reduces the reliance on cars, decreases automotive emissions, and leads to healthier residents.

The development is the brainchild of J. Michael Cheezem’s JMC Communities, a firm in St. Petersburg, Fla. Cheezem, already a well-known name in Florida, came to South Carolina to plan the development at the beginning of the Great Recession. The development’s name comes from John C. Calhoun’s father, Patrick, who was a member of the state Legislature.

“South Carolina’s like a second home to me,” he said at a recent Urban Land Institute discussion.

Cheezem’s father, Charles, was also instrumental in the community and was a member of Clemson University’s class of 1944. A lifelong learning center in the town square was named in his honor.

Cheezem said they listened to Clemson University officials and neighbors in planning the community. His goal was to give “win-win” situations for the community and the development.

The centerpiece of the development is Town Square, another throwback to vintage town development. The 173-acre community will eventually contain 435 residences, with a third of the development being open space. The community was planned as multi-generational, with everyone from young professionals to retirees living within the boundaries.

Rob Goodill, of Torti Gallas and Partners of Silver Springs, Md., the urban designers behind the community, said the townhomes address younger families, while the condominiums aim for “move-down,” older buyers.

“There were a lot of opportunities and a lot of constraints,” Goodill said. He said the town square was inspired by nearby historic Pendleton.

The town square was created with retail and community in mind. Town Center manager Chris Hodge said one of the primary goals early on was attracting an upscale restaurant. When he took a class at Harvard University about building town centers, he made connections that would lead to Rick Erwin’s Clemson, the caliber of fine dining he sought.

For those looking for something simpler, Joe’s New York Pizza opened a new restaurant. The rest of the square is populated with a number of shops and businesses, including a gym, law firms, a wine bar, and several retailers.

The Inn at Patrick Square features 36 guest rooms and nine suites and features a coffee shop and a fine-dining establishment. There are a number of office suites and spaces, and all of them are connected with wifi and conference rooms.

The framework for the development was laid in 2007, and the first models were built in 2008, just before the Great Recession. Fortunately, lines of credit were opened before the market collapse, but some of the plans were changed as the housing market was taking a tumble. According to Cheezem, the town square was scaled down to make it more visible.

As the economy improved, the building has continued, and there are still projects heading into the Patrick Square. A 50,000-square-foot senior-living community is slated to open this year.

According to Hodge, the developers sought to minimize Patrick Square’s footprint because the variety of commercial uses have lower overall parking requirements. It’s because of this, he said, that they were able to set aside a third of the development as a green space. In fact, Patrick Square was the first community in South Carolina to receive the EarthCraft Community certification. In 2010, it was named EarthCraft Community of the Year.

On the construction end, Hodge said the builders use the best practices and materials to build a healthy and energy-efficient home.

“We strive to balance efficiency and affordability to deliver the best value for our homeowners,” he said.

Retired Clemson professor Terry Farris has been a resident of Patrick Square for seven years. He said he was a believer in the project before it was built.

He said the best part of the project is the people. According to the website, there are more than 60 social groups and planned activities, like garden events and community concerts.

“It’s a safe value,” Farris said. “I was confident my values would go up.”