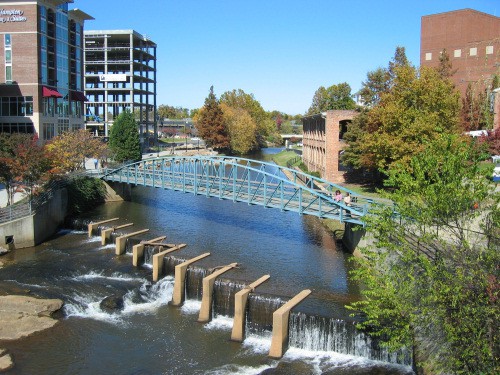 Source: Greenville News (May 25, 2017) –  A new report released Thursday by the U.S. Census Bureau probably won’t shock many who’ve watched the fast-paced development and influx of jobs in Greenville within the past decade.

The city of Greenville, according to the bureau’s latest population figures, is the fourth-fastest-growing city in the nation — growing by 5.8 percent as of last July from the year before, to 67,453.

The city’s share of population is but a fraction of the nearly 500,000 people estimated to live in Greenville County, but the rate of growth over the years shows a pattern of re-urbanization, Mayor Knox White said.

Just less than a decade ago, the city was trying to attract people but had been unsuccessful in growing its population since suburban flight began in the 1960s.

The city has been investing steadily in infrastructure, such as a new city park planned west of downtown, and has seen surpluses in tax revenues that will be set aside to accommodate further growth in population, he said.

The city’s revitalization downtown has paid dividends in attracting people and development, whether it’s renovation of homes in the North Main and Augusta Road neighborhoods, new homes slated for the massive development of the Verdae properties or the proliferation of luxury apartment growth in the West End.

Last year, the city issued 192 permits for single-family home construction, according to data provided by the city. The number has held steady at around 200 permits per year since 2013.

The city granted 508 permits for renovations last year, a steady increase from 360 in 2012, according the figures.

The number of permits for multi-family developments last year totaled 24, a drop-off from a high of 49 in 2015 when one project after another came through the pipeline.

Rece Morgan, president and CEO of Central Realty Holdings, said the company’s big investment in the Northpointe mixed-use development at the Canal Insurance Co. land north of downtown is a testament to belief in the city’s growth potential going forward.

The project, which will have 284 upscale apartments built around 20,000 square feet of retail space along with a Harris Teeter grocery store, has just recently broken ground.

Morgan said his firm has paid particular attention to job-growth numbers in the area.

“For anyone who looks at the statistics on job growth in the Upstate, you walk away from that analysis with a positive perspective,” he said. “We’re clearly working on the concept of re-urbanization. We feel like Greenville’s very well positioned for continued to growth.”

Ten of the 15 fastest-growing cities, with populations of 50,000 or more, were pinned across the South last year. Four of the top five were in Texas, with Conroe, near Houston, growing the fastest at 7.8 percent, the Census report showed.

“Since the 2010 Census, the population in large Southern cities grew by an average of 9.4 percent,” Amel Toukabri, a demographer in the Census Bureau’s population division, said in the release.

“I didn’t know it would be Greenville, but I’m not surprised it’s one in South Carolina,” McMaster said following a tour of BMW Manufacturing in Greer. “I’m not surprised. I say, congratulations to Greenville.”

Meanwhile, a new analysis of the entire Upstate predicts that the region will welcome more than 300,000 new residents, reaching a total population of almost 1.75 million people by 2040, an increase of 64 percent since 1990 and bypassing growth forecast rates for the Charleston and Columbia areas.

The analysis, which resulted from several advisory and steering committee meetings and focus groups, was conducted by The Riley Institute at Furman University, the conservation organization Upstate Forever and Ten at The Top, among others.

Throughout the past 25 years, the study reported growth in the 10-county region has had a low-density, single-use pattern, moving away from the city centers and requiring the expansion of infrastructure such as water and sewer, police protection, schools and parks — the so-called suburban sprawl.

Hybl said 90 percent of those in a meeting of dozens of elected officials throughout the region wanted to see the growth trend in a different direction.

The main tenet of the study, he said: don’t be like Atlanta or Charlotte.

A trend development growth scenario, the analysis said, would favor low-density, single-use development patterns and intensify moving away from existing city centers, requiring the expansion of infrastructure, all while consuming a “tremendous” amount of land.

Noonkester called the compact center the “most extreme” of scenarios – where growth is concentrated around the city centers, encouraging more opportunities to live, work, shop and play within the same area. The study said the remaining land could be used for open space, forests, rural and farm lands. The developed areas would focus largely on repurposed buildings and development of underutilized parcels, shifting home choices from single-family to apartments, condominiums or town homes.

Using this scenario, the emphasis would be switched from car to transit, and infrastructure investments would be lower, according to the analysis.

The third scenario – major corridors – considered how the Upstate would grow if growth occurred along the transportation corridors, creating a need for investment in “premium” transit and highway improvements.

The fourth and final scenario, referred to as rural villages, illustrated the region’s growth if it were concentrated into several “activity centers,” encouraging active living with places to work, shop, live and play. However, residents living in these centers likely would need to visit larger areas within the region to meet daily needs, such as work.

Anderson Mayor Terence Roberts, who also serves on the Anderson Area Transportation Study group, said the concepts described in the report could help any future planning in the Upstate.

“What keeps me awake some nights is the cost of infrastructure. We have aging roads and aging water and sewer lines,” said Roberts, who served on a four-person panel that discussed the ideas presented by speakers Noonkester and Joe Minicozzi, principal of consulting firm Urban3.

“We’ve got to have some type of framework in place and adjust it as we go down the line,” he said.

Another member of the panel, Greenville Area Development Corporation President and CEO Mark Farris, said future policies need to re-examine the traditional method of recruiting companies to the area.

“We’re winning and losing companies based on our ability to supply labor,” he said, adding that “we’ve started recruiting people” rather than recruiting companies that find people.

Andrea Cooper, executive director of Upstate Forever, issued a dire warning if the region does not begin to plan long-term.

“As our population increases, you will feel the impacts of that sprawling growth pattern even more,” she said. “Make no mistake: we are on a crash course to becoming the very type of congested, paved-over, metropolitan region that we’ve always said we do not want to become.”

Authors: Maayan Schechter and Eric Connor. Abe Hardesty, with the Anderson Independent-Mail, contributed to this report.